Watch the magic of the Himalayas when the sun rises over the Kanchenjunga range and the snow covered peaks slowly turn a pale pink and then a deeper orange against a bright cerulean sky. Along the hill slopes the multicoloured prayer flags snap in the breeze around small stupas as monks in saffron robes sway and chant mantras in remote monasteries. And the turbulent waters of the Rangit and Teesta rivers flow down the hill slopes, past forests and fields of wild flowers, creating waterfalls and lakes.

Sikkim is a magical land of hilly terrain and green valleys, encircled by the towering Himalayan ranges covered in perennial snow. This enchanting land is encircled by the highest Himalayan ranges dominated by the magnificent Kanchenjunga peak. The landscape is dotted with pine and birch forests, crystal clear lakes, silver waterfalls and fields of orchids and rhododendrons. Here the Buddhist faith is a part of people’s lives as melodic meditation chants float out into the silent air from Buddhist monasteries and there are brilliantly choreographed chaam dances at festivals that look like ancient paintings in vivid colours.

Gangtok is the capital of the picturesque state of Sikkim that was once a remote mountain kingdom that legends said was the Himalayan ‘Shangri-la’ – a hidden kingdom of magical beauty and a secret heaven that was very hard to find. As it was located high in the Himalayan ranges, in ancient times Sikkim was an important stop on the trade road called the Silk Route that connected India with Tibet and China and then moved on towards the Middle East and Europe. Here trader’s caravans arrived with loaded horses after traversing through the dangerous mountain roads of Central Asia. They arrived at the Nathu La pass carrying tea and silk from China and taking back spices and cotton from India. 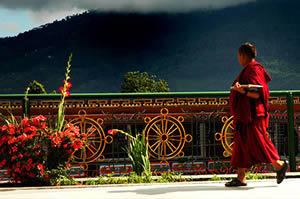 Sikkim is the second smallest Indian republic after the state of Goa. Here the Kanchenjunga, which is the third highest peak in the world, is worshipped as a mountain goddess. Sikkim was first the home of the mountain tribe of the Lepchas. Today the population also includes the people from Nepal, Tibet and Bhutan. The languages spoken here include Sikkimese, Nepali, Hindi, Lepcha, Bhutia and English. It is the Tibetans who introduced their form of Buddhism called Vajrayana or the vehicle of the thunderbolt into Sikkim. Today the famous monasteries here, like Pemayangtse and Rumtek belong to the various schools of Vajrayana Buddhism.

The kingdom of Sikkim was established in the seventeenth century by the efforts of three Tibetan lamas and the first king was Phuntsog Namgyal and he was given the title of Chogyal. The capital of the kingdom was first at Yuksom, then Tumlong and finally at Gangtok. The kingdom was surrounded by Nepal, Tibet, Bhutan and India and it was often at war with Bhutan and Nepal. During the British period, in 1861, the colonial government took over Sikkim and it became a protectorate of the British government, like many other Indian princely states.

When India became independent in 1947 the Indian government inherited the protectorate position from the British. At that time there was growing demand for democracy in Sikkim and in 1975 Sikkim became a part of the Indian union. The Chogyal was removed from power and now Sikkim has an elected government headed by a chief minister. 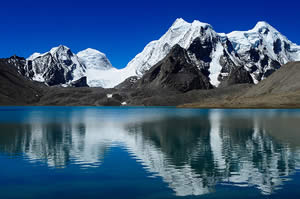 Gangtok stands at a height of 5047 feet in the Eastern Himalayas. The closest state is West Bengal and it is 97 km from Darjeeling, 114 km from Siliguri and 720 km from Kolkata. Beyond Gangtok there are other places worth a visit like Namchi in South Sikkim; Pelling and Yuksom in North Sikkim. The state is dotted with nature and wildlife sanctuaries and lakes. Gangtok has a mild, temperate climate throughout the year with summer temperatures at a high of around 28 degrees centigrade. 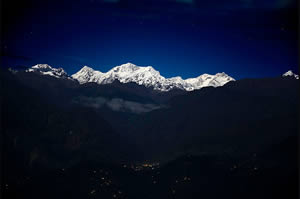 The charming and friendly city of Gangtok is the capital of Sikkim and it is located in east Sikkim. Gangtok means ‘hilltop’ and it is built on a narrow ridge by the Ranipul River. The houses are built along the slopes of the ridge and it creates a picturesque landscape. As its growing popularity with travellers proves, Gangtok is an ideal hill station with a mellow climate in summer, an easy relaxed ambiance and spectacular scenery all around.

For visitors interested in exploring the city there are a number of Buddhist monasteries called gompas and stupas called chortens that are worth a visit. Also there is an institute of Tibetology with an impressive museum, a zoological park, botanical garden and an old Hindu temple. 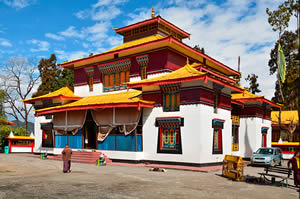 The Enchay monastery was built here in 1840 and this made Gangtok a popular Buddhist pilgrimage. Then in 1894 the Chogyal transferred the capital from Tumlong to Gangtok and soon it grew into the largest city of the kingdom.

The Ridge is a popular place for visitors to stroll and the Enchay monastery stands above the Ridge along the upper slopes. It is a place worth visiting during the morning prayers as it is very peaceful to sit and listen to the chanting of the monks. It is 200 years old and as the oldest monastery of the city it is the seat of the Nyingma order of Buddhism. The monastery displays beautiful images of Buddhist gods, goddesses, rare manuscripts and thangka paintings. Every year in January the monks perform the colourful masked dances during the Chaam festival. 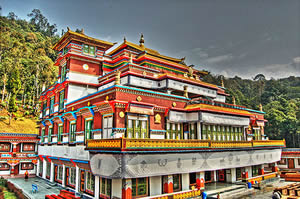 This monastery is the seat of the Kagyu order and is counted among the most sacred monasteries in Sikkim. Kagyu is a major sect of Tibetan Buddhism and the monastery has some the world’s rarest ancient manuscripts and religious objects. The monastery that is 24 km from Gangtok, by the Rangeet River, has some beautiful murals painted on the walls. The building is a copy of the original monastery in Lhasa, Tibet and the festival of chaam dances is held in July. The head of the Kagyu order is called the Karmapa and in 2000 the present Karmapa fled from Tibet and sought refuge in this monastery. 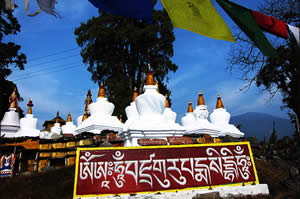 Another interesting Buddhist monument is the Dro-dul Chorten. It is a stupa that was built in 1945 by Rimpoche Trulshik, the head of the Nyingma order. Painted white with a golden spire it is a huge monument that can be seen from far away. Sacred relics, scriptures and mantras are kept inside the chorten and around the stupa there are 108 prayer wheels called Mani Lhakor that are set in motion by praying pilgrims. There is also a religious school called gompa within the complex that has a large image of Guru Padmasambhava.

The Namgyal Institute of Tibetology 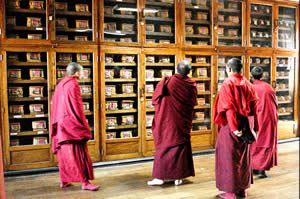 Established in 1958, this institute is worth a visit for anyone interested in the Tibetan schools of Vajrayana Buddhism and the art and culture of Sikkim. It is an important centre of Tibetan scholarship and in the museum are displayed a huge collection of sacred scriptures, images, thangka paintings and masks. It has one of the largest collections of Buddhist icons of deities in Sikkim like the beautiful Manjushri and also images of other bodhisattvas. The institute also publishes books on Mahayana and Vajrayana Buddhism and these are available at the book shop. 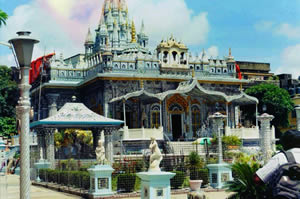 Built on land donated by the Chogyal in 1935, this is the oldest Hindu temple in Gangtok. Two other temples are the Ganesh Tok dedicated to Lord Ganapati and Hanuman Tok to Hanuman. 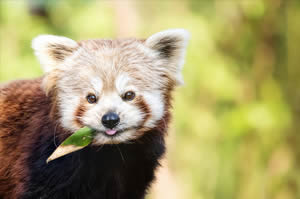 The Himalayan Zoological Park is a zoo that has animals of the region kept in their natural habitat. Here you can see the Himalayan black bear, snow leopard and red pandas. The Orchid Sanctuary at the Namgyal Institute of Tibetology and the Jawaharlal Nehru Botanical garden near the Rumtek Monastery display many species of orchids and many species of trees. 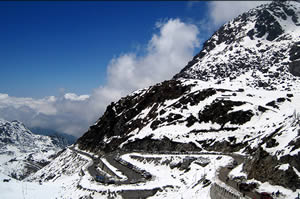 This mountain pass is at a forbidding height of 14,410 feet and the mountains around it are always covered in snow. It stands on the border between India and China and at one time it was an important stopping point on the Silk Route. This legendary trade road was the main connection between Asia and Europe. The road began in China and moved through Asia and ended at the Mediterranean Sea. It was not just a route for traders but also pilgrims and travellers and it led to an exchange of cultures between countries. Buddhism would travel by the Silk Route to China and then beyond to Korea and Japan and thus make it a world religion.