It is the most famous chariot festival in the world. Every year in June / July, the lunar month of Ashadh and the season of varsha or the rains, Lord Jagannath accompanied by Subhadra and Balabhadra ventures out of the temple for a slow and majestic journey down the avenue of Bara Danda.

Pilgrims come by the thousands to crowd the Bara Danda, waiting for an unforgettable show. The three chariot cars called rathas with brightly coloured canopies are dragged down the road by devotees to the accompaniment of drums, conches, bells and the chanting of mantras. The first English visitors to see this festival were amazed at the sight of the Rath Yatra as they watched the crowds pulling the chariot and even saw some pilgrims killing themselves under the wheels to gain nirvana. So the English word ‘juggernaut’ meaning a huge uncontrollable force has entered the English language.

Programme of the Rath Yatra 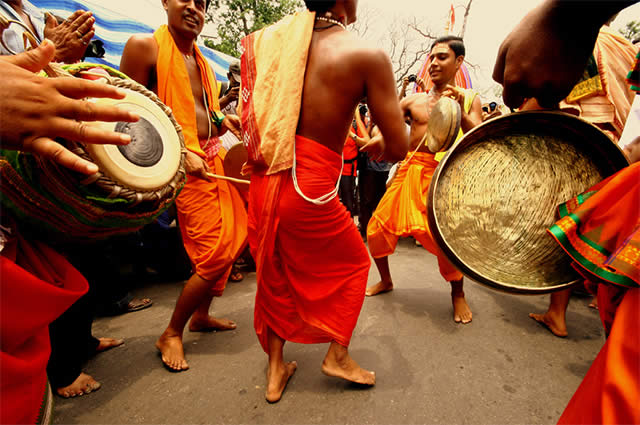 As Lord Jaganath is an aspect of Lord Krishna this yatra re-enacts the journey of Krishna from his childhood home of Gokul to Mathura. The locals also call the yatra ‘Pahandi Bije’ and ‘Gundicha yatra’ and there are elaborate rituals connected to the festival. Also as non-Hindus are not allowed into the temple, this is the one time in a year that everyone can view the three icons and people of all religions, castes and gender are allowed to pull the ropes.

The wooden chariots are made anew every year for the festival and after the festival is over they are broken up and the sacred wood is sold to pilgrims. As the three chariots wait before the temple’s gate, the simhadwar, the three images are taken out of the sanctum sanctorum, the garbha griha and placed inside. It takes at least six priests to carry each image. The yatra only begins after the King of Puri, who is the premier servant or ‘sevak’ of Jagannath uses a gold handled broom to sweep the chariots. Long, thick ropes are attached to the chariots and now pilgrims hold and pull them down the road.

The festival lasts for nine days, between the second and tenth day of the shukla paksha, the bright fortnight of Ashadha. The procession ends in the evening at the Gundicha temple that is three kilometres down the road. Gundicha was King Indradyumna’s queen and is considered the aunt of Jagannath and his siblings. So they visit her garden palace every year. On the tenth day, the shukla dashami of Ashadh the return journey begins called the Bahuda Yatra. Jaganath and his siblings enjoy changing their garments and on this day the images are clad in golden attire called Shuna Besha.

Legends of the rathas 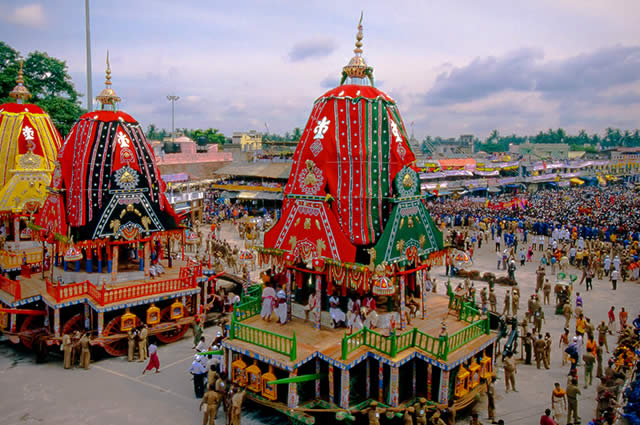 Each gorgeously decorated chariot has a cloth canopy, two rows of wooden carved horses with a charioteer placed in front and rows of huge wheels. Every chariot has a guardian deity and the horses, the charioteer, the flag flying on top and even the ropes have names. Also other gods and goddesses ride with the three main deities. The chariot of Balabhadra starts the procession, followed by Subhadra and Jagannath comes at the end.

Jagannath’s chariot is called Nandighosh and it has sixteen wheels and a yellow and red canopy topped by a sudarshan chakra. The guardian deity is Garuda, the half bird half human vehicle of Vishnu and the charioteer is called Daruka. The horses are named Shankha, Balahaka, Shweta and Haridasha. The flag is Trailokyamani, the rope is Shankhachuda and the accompanying deities are Hanuman, Ram, Lakshman, Narayan, Krishna, Govardhan, Dharana, Chintamani, Raghav and Narasimha who ride with Jagannath.

Balabhadra’s chariot is called Taladhwaja and it has fourteen wheels and a red and blue canopy. The guardian deity is Basudev and the charioteer is Matali. The horses are called Tibra, Ghora, Dirghashran and Swarnanava. The flag is called Urnani and the rope is named Basuki. The chariot also carries the images of the gods called Gadantakari, Harihar, Triambaka, Vasudev, Aghora, Pralambari, Natamvara, Tripurashiva and Mritunjaya.

Subhadra’s rath travels in the middle and it has twelve wheels, a red and black canopy and is called Padmadhwaja. The guardian deity is Jayadurga and she has a very special charioteer – her husband Arjuna, the hero of the Mahabharata. The horses are called Ruchika, Mochika, Jita and Aparajita. The flag flying above the canopy is the Nadambika and the rope is swaran chura. Subhadra’s companions are all goddesses – Chamunda, Bhadrakali, Harachandika, Katyayani, Jayadurga, Varahi, Kali, Mangala and Vimala.

The most important festival is the Rath Yatra and the festivals go on year round at the Jagannath Temple. The exact dates for each festival according to the lunar calendar can be checked on the temple website: www.jagannath.nic.in.

Most of the important Hindu festivals like Dussehra, Deepavali and Ganesh Chaturthi are also celebrated at the temple. The festivals that are unique to the temple are the following: