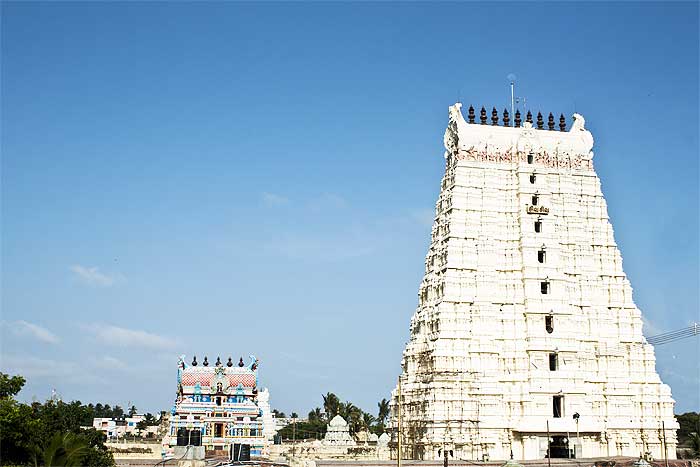 At the heart of Rameswaram stands the Ramathaswamy Temple, one of the greatest shrines in India. And Daiwik Hotel is just 3 km from the temple.

The story of the temple begins after the war in Lanka was over. After coming back to Rameswaram Lord Rama decided to perform the severest of austerities as a penance for the deaths in the battle and also because among those he had killed was Ravana who was a Brahmin.

Also he wanted to worship Lord Shiva to appease him as the god was angered at the death of his devotee Ravana. The Ramanathaswamy Temple is said to stand at the site of this antyeshti and prayaschitta yagya.

The Skanda Purana says the yagya took place in the month of Jyeshtha, the Tamil month of Ani; sukla paksha, dasam tithi. For the ceremony Rama needed a Shivalingam and he sent Hanuman to Mount Kailash to get a crystal lingam. However, at the auspicious hour Hanuman had still not returned and so Sita created a lingam with sand and Shiva was worshipped as Ramanatha, the lord of Rama. This is the Ramalingam that stands in the garbha griha of the temple.

Then Hanuman came back and was deeply disappointed to find the yagya over. He even tried to establish the crystal lingam in the yagya site by moving the sand lingam by wrapping his tail around it but he failed. There is even a sculpture in one temple mandapas showing this scene and the Ramanthalingam is said to carry the marks of his tail.

Rama took pity on Hanuman and said that both the lingams will be installed in the sanctum and the crystal lingam, called Vishwalingam will always be worshipped first. So, there are two shivalingams in the garbhagriha of the temple. The Vishwalingam is considered to be the jyotirlingam as it was given to Hanuman by Shiva himself. It is believed to be swayambhu, or a self manifested shivalingam.

History & Architecture of the Temple

Originally, the temple was just a brick and thatch structure and it has taken centuries to evolve to its present magnificent architecture. The first stone temple was built here by the Chola kings in the 12th century and additions were made by kings of the Pandya dynasty and the rulers of Vijayanagar. The great Krishna Deva Raya of Vijayanagar came here in 1513 after conquering Lanka and made magnificent gifts to the temple. The Sethupati kings of Ramnad became the guardians of the temple during the rule of the Nayakas and they finally completed the temple. Today, it is considered as one of the finest examples of Dravidian architecture.

The precinct of the Ramanathaswamy Temple has three enclosures, a number of tall gopuram gateways, many smaller shrines, sacred tanks and gardens. The two main shrines are of Shiva and his consort, the goddess Parvati who is called Parvathavardhini Amman. The broad corridor that encircles the shrine is justly famous as a visually stunning experience. It is one of the longest in the country with a length of 1240 metres supported by 1212 intricately carved pillars, sanding images of patrons and a beautifully painted ceiling.

Agniteertham
The sea itself is a bathing site for pilgrims going to worship at the Ramanthaswamy Temple. It is said that Rama took a ritual bath here before performing the yagya. This beach is the closest to the temple and devotees take a bath here before entering the temple. The more devout will then go on to bathe in the twenty two tanks within the temple precinct called teerthams. A modern temple dedicated to the sage Adi Shankaracharya also stands on this beach. He had visited all the great jyoritlingam temples on his journey around the country.

The Teerthams
A teertham is a temple tank or well where devotees bathe before performing puja. The temple has twenty two tanks named after deities, legendary heroes and pilgrimages. Bathing in them is supposed to bring many kinds of benefits like being freed of one’s sins, knowledge of one’s future to good health, prosperity and wisdom. The names of the teerthams are: Mahalakshmi, Savitri, Gayatri, Saraswati, Setu Madhav, Gandhamadana, Kavatcha, Gavaya, Nala, Neela, Shankha, Sakra, Brahmatya Vimochana, Surya, Chandra, Ganga, Yamuna, Gaya, Shiva, Satyamrita, Sarva and Koti. The most sacred is the koti teertham which was created by Rama aiming an arrow at the earth and its waters are used in the temple pujas. It is also carried to other pilgrimages like Varanasi.

Shrines in the Temple
The main garbhagriha has the Ramalingam and the Vishwalingam and the image of the goddess Vishalakshi, a consort of Shiva. Most of the participants in that ancient yagya established Shivalingams around the temple. There are eleven sacred shivalingams in various shrines in the temple precinct established by Rama, Hanuman, Sita, Lakshman, Sugriva, Nala, Angada, Nila, Jambavan, Vibhishana and Indra.

The next most important shrine is the Amman temple dedicated to Parvathavardhini, the goddess of shakti. The hall in front of her garbha griha is called the Shukravara Mandapa as every Friday there is festival when the goddess is taken in procession in her gold palanquin to meet Lord Ramanatha. Another popular shrine dedicated to Vishnu is the Setu Madhav temple, as the guardian of the bridge. The Kashi Vishwanath shrine holds a shivalingam brought by Hanuman from Varanasi and his consort Vishalakshi Amman also has a temple.

The temple has some of the finest examples of religious sculpture on the walls and pillars and studying them one is reminded of the rich traditions of Hindu mythology. It is a many hued world of gods, goddesses, heavenly creatures and demons. The most interesting are the images of the many aspects of Shiva including Shiva as Nataraja, the lord of the dance, as Tripurantaka, the celestial archer and as Dakshinamurti, the great teacher.