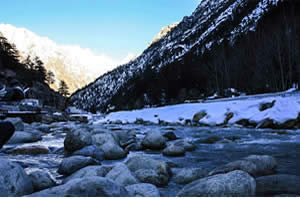 This tirtha is dedicated to the goddess who is also the holiest river in India – the Ganga. The river is worshipped at the Gangotri Temple at a height of 3140 metres and the actual source of the river is at Gaumukh, 19 km above the temple. The road to Gangotri and then to Gaumukh beyond it has unparalleled scenic vistas with deodar and silver birch forests standing against the backdrop of rugged mountains.

Here the stream named Bhagirathi appears from a cave at the edge of a glacier and is one of the seven rivers that will combine to form the Ganga that flows into the plains at Haridwar. This is the largest glacier in the region and is the source of three rivers, Bhagirathi, Alakananda and Mandakini. Here the river is called Bhagirathi as our myths tell us that King Bhagirath prayed to the river to make her appear on earth. Adi Shankaracharya consecrated the temple and devotees perform the shraddha and pindadaan rituals here by the bank of the river. 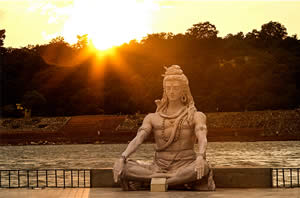 The Ganga was a goddess and a river that flowed in Swarga, the heaven of the gods. Then events on earth forced her to leave her celestial home. A powerful king named Sagara held the sacrifice called the ashwamedha yagya in which he set free a horse and conquered the land wherever the horse wandered. Lord Indra was watching this from heaven and he was displeased at the arrogance of Sagara. So he stole the horse and hid it in the ashram of Rishi Kapila who had his hermitage by the sea at Gangasagar.

Sagar sent his sons to search for the horse and when they found it in the ashram they believed that Kapila had stolen it. The rishi was first disturbed in his meditations and then accused of theft and was so angered he opened his eyes and the heat of his rage burnt Sagara’s sons to ashes. The ashes of the sons lay by the sea and Sagar knew that the only way he could give them salvation was if the river Ganga came down to earth and washed the ashes in her sacred waters.

Sagar prayed but Ganga refused to descend to earth. Then Sagara’s great grandson Bhagirath went up into the hills and started such severe penances that Ganga had to listen but she was angry. She began to flow so powerfully that Brahma was afraid she would destroy all creation that came in her way. He begged Shiva to help and the benign god promptly put his head in the path of the river to break her fall. Ganga became calmer as she got lost in the coils of his matted hair and came out as seven streams that would combine to become the Ganga again.

These seven streams are Bhagirathi, Mandakini, Alakananda, Nandakini, Pindar Ganga and Dhauli Ganga. There is a yatra called Sapta Samudri Tirtha in which pilgrims bathe in the waters of the seven rivers. The Ganga then flowed across the plains to reach Gangasagar where the ashes of Sagar’s sons were finally liberated before the river merged into the sea.

The temple is dedicated to the goddess Ganga and there are is a marble image of the river in the sanctum. Also there are shrines to Lakshmi, Saraswati, Annapurna and Shiva. The goddess Parvati is said to have bathed in the river, where a tank called Gauri Kund now stands. The Kedar Ganga merges into the Bhagirathi here and there is a waterfall called Sahasradhara. There is also a cave here called Pandava guha where the Pandava brothers lived while on their pilgrimage up the Bhagirathi.

The simple granite temple was built by the Gurkha general of Nepal, Amar Singh Thapa in the 18th century and was later renovated by the king of Jaipur and added the Rajasthani pavilions or chhatris on the temple. Every evening there is a beautiful Ganga aarti when the river itself is worshipped with a giant many flamed lamp like it is done in Haridwar and Varanasi. Near the temple and next to the river is a flat stone called Bhagirath Shila where King Bhagirath is said to have performed his penances and pilgrims perform a puja there. 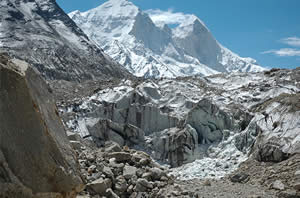 Once the Gangotri glacier used to flow right till the temple but now it has receded because of climate change. This is the largest glacier of the region nearly 30 km in length and up to 8 km in width. Pilgrims who seek the real source of the Bhagirathi and are able to trek on the glacier area also go on to visit Gaumukh, literally ‘cow’s mouth’. This is the cave at the edge of the glacier where the Bhagirathi emerges. Gaumukh is at a height of 4200 metres above Gangotri and it is a tough 19 km trek on slippery slopes with snow and rocky hill paths. The journey takes at least two days with an overnight stay at Chirbasa or Bhojbasa. Six kilometres above Gaumukh are the spectacular meadows called Tapovan and Nandanvan.