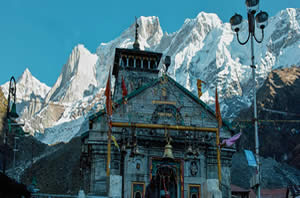 If any god belongs naturally to the environment of the Himalayas it is Lord Shiva. He is the wandering ascetic who walks around the hills and forests to meditate. He is Pashupati, the lord of animals and Gangadhara, the god who held the Ganga in the coils of his matted hair. He is married to Devi Parvati who is the daughter of god of the mountains, Himalaya and his wife Mena. Shiva is very like the mountain dwellers of the Garhwal Himalayas, a man of nature and a god who is kind and generous, easy to anger and just as easy to please. 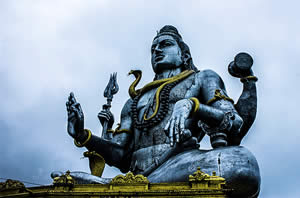 Like pilgrims follow the Alakananda to reach Badrinath they follow the Mandakini River on their journey to Kedarnath. This region is called Kedarkhand in the Skanda Purana. Here the grey granite temple stands in a craggy valley surrounded by peaks that are covered in perennial snow, at a height of 3500 metres that is 400 metres higher than Badrinath.

In this valley four smaller streams of the Dudhganga, Madhuganga, Swargaduari and Saraswati flow into the Mandakini as it rushes past the temple in tumultuous energy. There are also four sacred pools here called Retah, Udak, Rudra and Rishi.

Traditionally the order of the Chaar Dhaam journey is going to Yamunotri and Gangotri first to collect the sacred river water from the source and then go to Kedarnath and Badrinath. Though nowadays many pilgrims only visit the last two tirthas. The water from the Bhagirathi at Gangotri is used in the pujas at Kedarnath and Rameswaram in the south.

Legends say that the sages Nar and Narayan worshipped Shiva here for the first time and placed an earthen lingam in a temple. In the 8th century Kedarnath was visited by Adi Shakaracharya, he meditated here and is said to have gained moksha. Like at Badrinath, he appointed nambudari Brahmins from Kerala as Rawals or the chief priests at the temple. Kedarnath is mentioned in the Mahabharata and the Pandava brothers are said to have built the first stone temple here.

The story goes that the Pandavas wanted to atone for gotra hatya, the killing of their kin the Kauravas. They went first to Varanasi or Kashi but Shiva was not willing to see them. Shiva took the form of a bull and hid in Guptakashi, which means ‘hidden Kashi’. When the Pandavas found him there Shiva began to sink into the ground but Bhima caught hold of the tail and would not let go. Finally Shiva relented and appeared at Kedarnath and accepted their worship. After building a temple and performing a yagya the Pandavas continued on their final pilgrimage to moksha in the mountains beyond Kedarnath.

Unlike Badrinath, Kedarnath is not easy to reach. The buses only go up to Gaurikund and after that pilgrims have to trek for 14 km on a stone paved path along the Mandakini to reach Kedarnath. On their return journey tired pilgrims take a bath in the sulphur springs at Gaurikund and visit the temple there. It is said that Parvati, also called Gauri performed severe austerities here to gain the hand of Shiva and there is a Gauri Devi temple here. 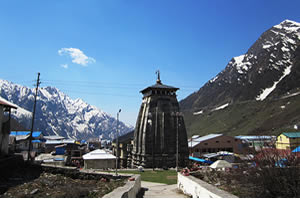 The temple at Kedarnath is a simple granite structure that seems to reflect the austere and ascetic character of Shiva. Framed by the Sumeru peak, the temple is built on a high stone platform and the exterior walls are unadorned but the interior walls are covered with carvings. Traditionally Hindu temples face the east but this shrine faces the south with a flight of stairs leading up to the arched doorway. Pilgrims enter a porch opening into the main hall or mandapa and carved wooden doors lead to the sanctum of the garbha griha. The sloping stone roof of the garbha griha is topped by a shikhara with a golden amrit kalash or the pot of holy nectar.

The jyotirlingam of Lord Kedareshwara in the sanctum is an irregular three faced stone shivalingam. Pilgrims often arrive here with the water from the Ganga at Gangotri and they are allowed to touch the lingam, pour the libations of milk, water and ghee and decorate it with flowers in the ritual of abhishekha. A stone image of Shiva’s bull Nandi stands at the doorway and there are smaller shrines to Parvati and Ganesha. There are carved images of Krishna, the Pandava brothers, their wife Draupadi and mother Kunti. Adi Shankaracharya had installed images of the rishis Nar and Narayan and a marble pillar marks the place where he gained moksha. 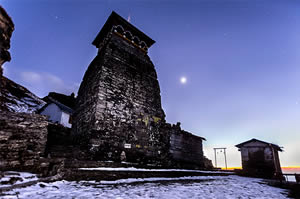 The legend goes that when Shiva hid from the Pandavas he turned himself into a divine bull and there are five tirthas where parts of the bull appeared. These temples are part of the Panch Kedar Yatra which is a very difficult journey as many of these temples are in remote villages and pilgrims have to trek along steep hill tracks to reach them. The Pandavas are said to have built the temples of the Panch Kedar tirthas. It is recommended that pilgrims hire the services of an experienced guide to find these remote temples.

The Panch Kedar tirthas are the five abodes of Shiva and they are in the valleys between the Mandakini and Alakananda rivers. The tirthas are – Kedarnath, Tunganath, Rudranath, Kalpeshwar and Madhyamaheshwar. The hump (pinda) of the bull appeared are Kedarnath; the arm (bahu) at Tunganath; the face (mukha) at Rudranath; the hair (jata) at Kalpeshwar and the navel (nabhi) at Madhyamaheshwar. The main body of the bull appeared in Nepal where the great Pashupatinath Temple stands in Kathmandu.

For the Panch Kedar Yatra buses drop off pilgrims at access points and after that it takes at least a fortnight of walking along narrow hill tracks for a total of around 150 kilometres. The paths are through a magnificent landscape of meadows, forests, waterfalls and streams. The Madhyamaheshwar Temple is at Mansuna Village, 30 km from Guptakashi. In one of the shrines there is a beautifully carved image of Ardhanarishwara, the half Shiva, half Parvati deity. The temple at Tunganath is reached after a seven hour climb from Chopta and the temple stands next to the stream called Akash Ganga.

The temples as Kalpeshwar and Rudranath are cave temples. For Kalpeshwar pilgrims take a bus from Joshimath to Helang and then there is a 10 km trek where the temple is inside a cave and the deity is called Jateshwara. Among the five tirthas only Kalpeshwar is open all the year round. The others close at the arrival of winter. For Rudranath pilgrims have to take a bus from Gopeshwar to Sagar and then there is a 24 km trek to the temple where Shiva’s face or mukha is worshipped. This is the toughest climb through steep hill tracks and in high altitudes. The Rudraganga stream flows beside the temple and there is also a small Vaitarini lake nearby.