The daily pujas and festivals at the Badrinarayan Temple at Badrinath are all held during the period when the temple is open from the month of April/May to October. The dates of the opening and closing of the temple change from year to year according to the lunar calendar.

The dates for that specific year are announced after Basant Panchami in February by the chief priest of the temple, the Rawal.

For the dates when the temple is open and the timings of pujas and festivals please check the temple website.

The Badrinarayan Temple website is www.badrikedar.org.
You can also check with the Garhwal Vikas Nigam, the tourist authority of the region of the Garhwal district. Website www.gmvnl.com 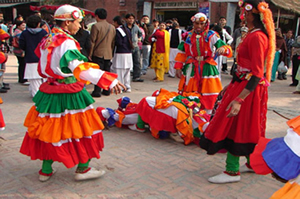 A fair called Mata Murti ka mela is held at the Badrinarayan Temple every September. The image of Uddhav is taken out of the temple and taken to the Mata Murti Mandir that stands near the temple. Some believe it is the image of the goddess in the temple of the mother of Lord Badrinarayan, though it is unclear which goddess is considered to be the mother of the deity. Others say that it is the Mother Goddess Devi who is worshipped here as Ganga, a life giving river. 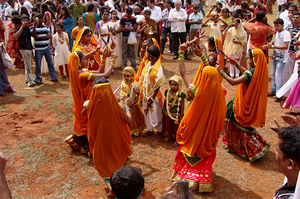 Krishna Janamashtami celebrates the birth of Lord Krishna in Mathura. He is the eighth avatar of Lord Vishnu. As it is across the country, Janamashtami is celebrated here with special pujas all day and night every August. 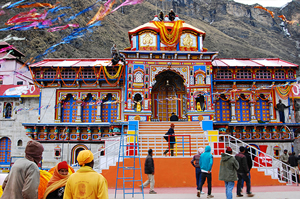 The week long Badri-Kedar Utsav has been started by the tourism ministry of the Uttarakhand government. Organised in July / August it has cultural festivals being held at both Badrinath and Kedarnath. The dates can be found on the Garhwal Mandal Vikas Nigam website. 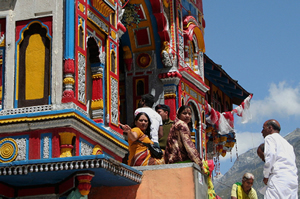 The five day ceremony before the temple closes for winter begins with a special puja at the Ganesh temple before its doors are closed. On Day 2 the gates of the Adi Kedareshwar temple are closed. On Day 3 there is a worship of books and then the Ved Paath and Mantrachaar – the daily recital of mantras – are stopped.

On Day 4 the goddess Lakshmi is worshipped before the doors of her shrine are closed. On the final day there is a special shringar puja of Badrinath when the image of Lakshmi is brought into the sanctum before the main temple is closed. It opens before the summer next year in April / May.