Most Hindu tirthas are located in beautiful landscapes – hills, by rivers, beside the sea but few can match the majestic beauty of the landscape around the Badrinarayan Temple at Badrinath.

Pilgrims on the Chaar Dhaam Yatra coming from Rameswaram bring the waters of the Indian Ocean to bathe the image of Vishnu in the garbha griha of the Badrinarayan Temple. Others carry the waters of the Alakananda River to the Ramanatha Swamy Temple at Rameswaram to perform an abhishekham ritual of the shivalingam at the temple. The mahaparikrama is truly a great circuit, thus completing an extraordinary religious journey across the Indian subcontinent.

The temple stands on the left bank of the Alakananda as it flows into a valley flanked by the two hills called Nar Parvat or the mountain of man and the Narayan Parvat or the mountain of god. The slopes are dotted with waterfalls and hot water springs where pilgrims bathe during the pilgrimage season that is between May and October. The temple is closed before the arrival of winter when the road to Badrinath is covered in snow.

In the 8th century the Shankaracharya first established the image of Vishnu in a cave and then a temple was built. Since then the temple has been built many times especially after it was damaged in an earthquake. The temple was expanded and embellished with images and carvings by the Garhwal kings and the spire or shikhara was plated in gold in the 18th century by the Maratha queen Ahilyabai Holkar of Indore. In 1803 when the temple was badly damaged in another earthquake the renovation was financed by the royal family of Jaipur. The only part of the temple that is traditionally believed to belong to the original Shankaracharya temple is the sanctum sanctorum or the garbha griha. 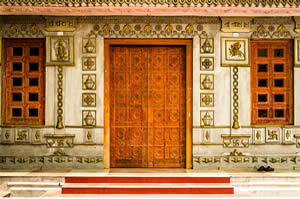 Adi Shankaracharya who travelled all across the land, arrived in the Himalayas accompanied by his disciple Padmapadacharya. He came to meet a renowned scholar named Rishi Badrayan who had written a religious treatise called Vedanta Sutra and Shankaracharya had written a commentary or bhasya on the treatise. At that time an old temple to Vishnu had been destroyed here. Shankaracharya decided to retrieve the icon of the temple, an image of Vishnu that had been thrown into a pond called Narada Kund that stood by the river.

Padmapadacharya entered the pond and found the image that Shankaracharya called Badrinarayan. The image was worshipped in a nearby cave called Garuda Gumpha until a temple was built for it. The Shankaracharya was very active in reviving Hinduism and so he also established a math, a monastery and theological college, at the nearby town of Jyotirmath, now called Joshimath. He got priests from the Brahmin community of Rawal Nambudris of Kerala to come and take charge of the puja and even today the priests at the Badrinarayan Temple belong to that community.

The architecture of the Badrinarayan temple is quite unusual compared to the design that is prescribed in the traditional architectural treatises like the Vastu Shastra. The present temple is built of granite and the building is unlike the traditional design seen in other Hindu shrine in the Garhwal region. As a matter of fact its wide facade with arched gateways and windows painted in bright colours resembles the Buddhist viharas or monasteries of the Himalayas.

A staircase leads up to the facade has an arched gateway in the middle with a row of windows on both sides. The gateway is topped by kiosks with curving roofs and this leads to the first hall or mandapa. The hall has pillars and smaller shrines and leads to the garbha griha, the sanctum with the temple icon of Vishnu. The sanctum is said to belong to the original temple built by Shankaracharya and is the only section that has not been rebuilt over the following centuries.

In the dim, lamp lit garbha griha the ancient, black stone image of Vishnu sits on a high pedestal. This is Badrinarayan, the lord of Badrinath and he sits below a golden canopy, clad in silks and jewels and covered in flowers. It is made of the black stone called shalagram shila that is sacred to Vishnu. The image shows the god sitting in the meditative padmasana pose, legs crossed with his hands resting on his lap. There are fifteen other deities within the precinct of the temple that are also worshipped by pilgrims.

At the door of the sanctum is a shrine called the gaddi or seat of Shankaracharya where he sat in meditation. The images of Vishnu’s vehicle the Garuda, Kuber the god of wealth, Ganesha, Krishna’s friend Uddhava and the sages Narada, Nar and Narayan also stand within the sanctum. Vishnu’s consort the goddess Lakshmi has her own shrine next to the main sanctum and there are smaller shrines to Narasimha, the half man half lion avatar of Vishnu, the goddess Navadurga and a Ganesh called ashtabhuja as it has eight arms.

SEASON: The Badrinarayan Temple is open from end April / early May to end October. Once it begins to snow the temple is closed and worship continues at the Yogadhyan Badri Temple in Pandukeshwar.
Check the temple website www.badrikedar.org for the year’s dates of opening and closure of the temples at Badrinath and Kedarnath.

By October it begins to snow and the roads become difficult to navigate. As the priests prepare to shift to Joshimath, they leave a lighted lamp before Lord Badrinarayan in the garbha griha and it is said that the flame still flickers when they return and reopen the temple six months later in spring. 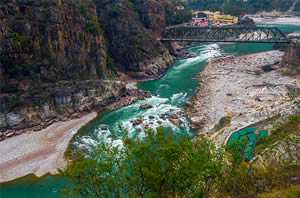 Right next to the icy waters of the Alakananda are five sulphur springs or kunds where pilgrims bathe in the reviving hot water before visiting the temple. The springs are called Narada, Rishiganga, Kurmadhara, Prahlad Dhara and Tapta Kund. It is said that the image of Badrinarayan was recovered from the Narada Kund. There are five rocks that stand beside the Narada Kund called Narada, Narasimha, Varaha, Garuda and Markandeya shilas and these are also worshipped by devotees.

The main ghat beside the river is the Brahma Kapal Ghat. The legend of the name is connected to the story of Shiva and Brahma. Once when the two gods had an argument, Shiva cut off Brahma’s head in a fit of anger and the severed head fell here. Brahma Kapal means Brahma’s forehead and the ghat has a platform and steps leading down to the river and here the pindadaan ritual is performed by pilgrims when they worship their ancestors. A short climb beyond the ghat takes pilgrims to a spot called Divya Darshini where it is said that the demi-gods called yakshas, yakshis and gandhravas come to view the temple.

The Badrinarayan Temple is among the most popular in north India and so pilgrims should be prepared for crowds and many hours of waiting to enter the temple. Also devotees get only a very quick glimpse of the idol as the surging crowds move them on. The smaller temples in the hills around the pilgrimage offer a much quieter and peaceful opportunity for prayers.