At the heart of Dwarka city stands the temple with the high shikhara from which a huge saffron flag flies in the wind. This is the ancient and holy Dwarkadhish Temple dedicated to Lord Krishna, the founder of the city of Dwarka. Here he is not worshipped as the lovable child god or the flute playing cowherd as he is in Mathura and Vrindavan. In Dwarka he is the regal and majestic Dwarkanath or Dwarkadhish, the supreme lord of Dwarka. The deity is also affectionately called Ranchhodji, the god who left the battlefield.

Worshippers of Lord Krishna have travelled to Dwarka for centuries and for Vaishnavas, the Hindus who worship Vishnu, this is one of the Char Dhaams and also one of the 108 Divya Desam tirthas. The great Hindu philosopher Adi Shankaracharya came here in the ninth century to establish one of his monasteries, the Sharada Math. In medieval times the poet saint Mirabai left the kingdom of Chittor in Rajasthan and spent her last years here. She sang to Krishna, 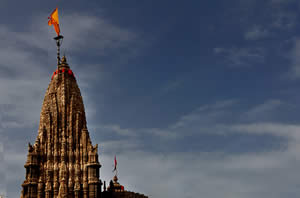 Traditions say that the first temple was built here by Krishna’s great-grandson Vajranabha. After Dwarka was swept away by the ocean he went back and once again established the Yadava kingdom in Mathura. Vajranabha returned to Dwarka to build a temple to Krishna at the site of his personal palace called Hari Griha. Tradition says that a temple has stood here at the confluence of the Gomati River and the ocean since then.

Adi Shankaracharya arrived here in the 9th century and renovated the temple and established the shrine of Adi Shakti on the fourth floor. During the medieval period, the temple was attacked by armies of Muslim sultans in the 13th and 16th centuries. During this time one image of Krishna was taken away and hidden in the island of Bet Dwarka to save it from destruction.

The present temple was built by a local ruler, Raja Jagat Singh Rathore in the 16th century and the sanctum is called Jagat Mandir. Very little is known about the history of the temple but it was probably built over an older structure as some sections have been dated to being at least a thousand years old. The temple stands in the middle of a crowded bazaar with a steep row of steps leading up to the porch. It is seven storeys high, built in granite and sandstone and shaped like a chariot.

The temple, also called Triloka Sundara Temple, is built in the Chalukya style that was popular in the Gujarat region and adheres to the Nagara architecture of North India. In this tradition steps lead to a porch over which is a decorative arch called torana. The torana gateways are topped by stone garlands in the snake like motifs. The porch opens into a series of halls that lead to the sanctum. The halls, called mandapams have spires and the highest spire or shikhara is over the sanctum or garbha griha. There is a path around the sanctum for devotees to circle the deity called the pradakshina patha. On the highest spire above the sanctum a huge silk flag flies called Dhwaja that is 52 yards long and is in seven primary colours.

The temple has two assembly halls supported by seventy two ornate pillars called the vimana mandapa and the natya mandapa. The halls are open with pillars and have carved tiered roofs. The shikhara over the garbha griha is topped by a carved pot shaped carving called the suvarna kalasha. From the entrance the vimana mandapa and the natya mandapa lead to the sanctum which is called Jagat Mandir or Nija Mandir. The whole temple is covered with ornate carvings and the walls and pillars have sculptures in floral and geometric motifs, images of gods and goddesses and decorative patterns. Many of these panels, especially in the lower sections of the temple can be dated to very ancient times.

There are two entrances to the temple called Swarga Dwar, the gateway to heaven and Moksha Dwar, the gateway to salvation. From the Swarga Dwar a flight of steps lead down to the Gomati River and pilgrims usually go there to bathe in the confluence of the river and the ocean before entering the sanctum area to watch the religious rituals and perform puja. 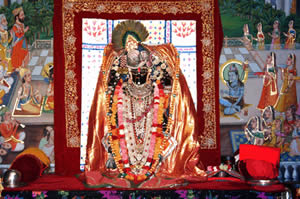 The deity in the garbha griha, the sanctum sanctorum of the Dwarkadhish temple is not an image of Krishna the cowherd with a peacock feather in his hair. Here he is worshipped as a resplendent king of the universe as he is the eighth avatar of Lord Vishnu. This Vishnu image is called Trivikrama.

Krishna as the king is a majestic figure. The image is made of a dark stone and has four arms holding the discus, sudarshana chakra, the mace Kaumodiki gada, the conch panchajanya and a lotus flower, padma. He is clad in yellow gold silk and wears a lot of jewellery and a high crown. Traditionally he wears two famous jewels, the Syamantaka and the Kaustabha.

Legends say that at least three images of Dwarkadhish-Ranchhodji have been consecrated at this temple. The first image was taken to Dakor and established at the Dwarkadhish Temple there and many pilgrims to Dwarka also visit Dakor to worship this image. The second image of a warrior Krishna was taken to the island of Bet Dwarka where it is worshipped as Ranchhodji. The third image of the Trivikrama was established in the Jagat Mandir.

Other shrines in the temple 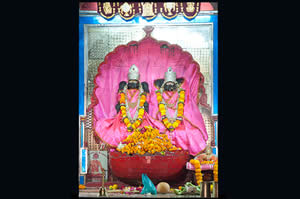 The mandapas have many small shrines that also receive worship. To the right of the main sanctum is the shrine to Krishna’s elder brother Balaram and to the left to his son Pradyumna and grandson Aniruddha. There are shrines to Vishnu Purushottam, and Shiva as Kusheshwara Mahadev, Krishna’s mother Devaki and Vishnu as Veni Madhav. In the compound there are shrines to Lakshmi, Saraswati, Radha and to Krishna’s three queens, the patranis, Satyabhama and Jambavati.

The bank of the Gomati River has the Chakra Tirtha Ghat where devotees take a bath before heading into the temple by the 56 steps leading to the Swarga Dwar. Here there is the small Samudra Narayan Temple that has five sweet water wells called Panchanada tirthas. It is also said that there are pebbles found on the beach with the imprint of Vishnu’s sudarshana chakra called dwarka shila that are taken back as holy stones by devotees.