Daiwik Hotels welcomes you to an ancient city by the wave lashed coast of the Arabian Sea – the spiritually sublime Hindu pilgrimage of Dwarka.

Dwarka was once a magnificent city by the sea built by the warrior-king Lord Krishna. Today he is worshipped as a god and Dwarka is believed to be among Lord Krishna’s most sacred abodes. Dwarka is a complete pilgrimage, vibrant with spirituality, redolent with the prayers of devotees of Krishna, as for centuries it has been on the pilgrim path of the faithful.

Dwarka is a unique tirtha : 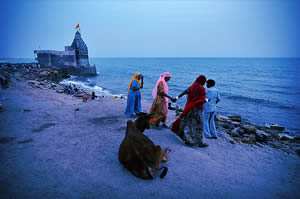 Ancient Dwarka is on the pilgrim trail for the devotees of Lord Vishnu and Lord Krishna and also those worshiping Lord Shiva and the goddess Mahadevi.

So Dwarka is a supreme tirtha for many reasons:

A city of Krishna, a saptapuri, a chaar dhaam, a divya desam, a jyotirlingam, a devi peetha and a Shankaracharya matha. Dwarka is truly blessed.

This is a land that echoes to folk lore and the presence of the heroes of the epic Mahabharata. Arjuna came often to Dwarka to meet his friend and mentor Krishna. In the 9th century the great Hindu sage Adi Shankacharya arrived here to establish a monastery. The medieval Bhakti poetess Mirabai, who sang the praises of her beloved Krishna, came here to worship at the ancient Dwarkadhish Temple.

This is the land of Krishna, king, philosopher, charioteer and as a god he is the eighth avatar of Vishnu and his majestic presence permeates the air. Dwarka adores him by his local name of Ranchhodji and worships him with bhakti, where he is both the all knowing lord and also a compassionate friend.

This is Lord Krishna’s karmabhumi, where he strove as a king and Daiwik Hotels will take you on an unforgettable journey through this serene, picturesque landscape and its amazing temples. 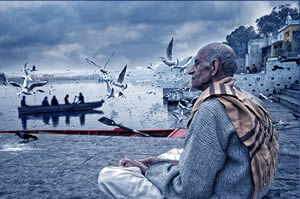 Dwarka stands on the Arabian Sea by the west coast of India. It is located in the Jamnagar District of Gujarat, in the Saurashtra region on the Gulf of Kutch. It is 457 km from Ahmadabad, 230 km from Rajkot, 75 km from Porbander and 148 km from Jamnagar. Nearby pilgrimage sites include the jyotirlingam at Somnath, the sacred Krishna tirtha of Prabhas Patan and the ancient sun temple at Modhera.

‘Dwar’ means door and ‘ka’ means eternal bliss and so Lord Krishna’s city offers eternal bliss to its people and pilgrims who enter through its doors. It is also called Dvaravati, Dwarkapuri, Dwarika and in our ancient texts it was describes as a ‘suvarna nagari’, a golden city.

India’s coastline along the Arabian Sea begins here and this region has very old traditions of trade. The Harappan port of Lothal that flourished around 3500 BCE was located here. So for thousands of years ships have moved between the Gulf Coast and Arabia to Gujarat and made this a culturally rich and varied region. 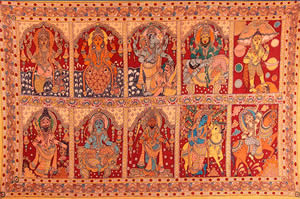 Krishna is the eighth avatar (incarnation) of Lord Vishnu who is the protector and preserver of all creation. Vishnu is a solar god and among the trinity of Lord Brahma, Lord Vishnu and Lord Shiva, he is the most benign and generous. He is worshipped with joyous hymns and even dancing, the offering of flowers, incense and food. Vishnu is a compassionate deity who always listens to the prayers of his devotees, understands our dilemmas and forgives our sins, offering salvation and mercy.

The sage Bhrigu wrote about why Lord Vishnu is believed to be the supreme deity, “Here is the greatest of the gods. He surpasses others by the most powerful weapons, of kindness and generosity.” And his mythology can be found in the Vishnu Purana, Vayu Purana and Bhagavad Purana.

The stories of his two most important incarnations are to be found in the epics – of Rama in the Ramayana and of Krishna in the Mahabharata. The Mahabharata also contains the Harivamsa that tells Krishna’s life story and the famous verses of the Bhagavad Gita. The Gita is in the spoken words of Krishna and this philosophical treatise is one of the most sacred of Hindu writing. It’s a text that has inspired and spiritually sustained Hindus for thousands of years.

Hindus divide time into four yugas – Satya, Dwapar, Treta and Kaliyuga. The world ends after Kali Yuga and creation begins again. The death of Krishna, the king of Dwarka, heralds the beginning of the Kali Yuga.
Hindus believe that Vishnu descends on earth in many incarnations called avatars and takes the form of a super human being who comes to defend the righteous and defeat evil. So Krishna also came to earth for the same purpose and as he tells Arjuna in the Mahabharata,

“Whenever righteousness declines,
And unrighteousness holds sway.
Then do I manifest myself in bodily form,
To protect the good, to destroy evil.” 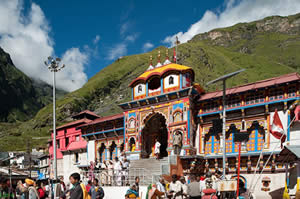 The four pilgrimages of Badrinath, Dwarka, Puri and Rameshwaram are dedicated to the various aspects of Lord Vishnu and are called Chaar Dhaam. The Chaar Dhaams are placed at the four cardinal points of the Indian subcontinent. Badrinath in the Himalayas of Uttarakhand; Dwarka in the west by the Arabian Sea in Gujarat; Puri in the east by the Bay of Bengal in Orissa; and Rameshwaram in the south, by the Indian Ocean in Tamil Nadu. At Dwarka Vishnu is worshipped in the form of Krishna.

Incidentally, there is also a Chaar Dhaam of the hills, however these are not all tirthas of Vishnu. These four tirthas are found in the Himalayan ranges of Uttarakhand and the tirtha yatra includes Kedarnath, Badrinath, Gangotri and Yamunotri. Kedarnath is a Shiva shrine, Badrinath is dedicated to Vishnu and the last two are the sources of rivers Ganga and Yamuna. 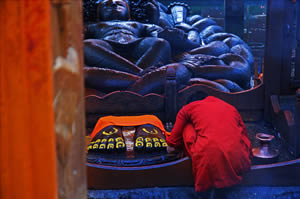 The Chaar Dhaams of Vishnu are the favourite abodes of the god and it is said that he visits each of them every day. In Hindu mythology Brahma creates the universe, Vishnu preserves it and Shiva is the celestial destroyer so that the cycle of creation can start all over again. The Chaar Dhaams are a part of the role of Vishnu as the great preserver, who is Jagannath, the divine monarch of the universe and Trivikrama, the supreme lord of the three worlds.

It is said that Vishnu starts his day by bathing in the Alakananda River that runs past the temple at Badrinath. Then he travels to Dwarka where he gets dressed in his golden robes, called pitambar vastra and puts on magnificent jewellery appropriate to the king of the universe. At Puri he is offered a fabulous meal of fifty six dishes called Chhappan Bhog. Everywhere, this kind and generous deity has the time to listen to the prayers of his devotees. Then finally he arrives at Rameshwaram for a well earned rest after the arduous task of preserving all creation.

SAPTAPURI: This Sanskrit shloka lists the seven tirthas that bring moksha:
“Kanchi, Kashi, Maya, Ayodhya, Avantika.
Mathura, Dwaravati chaiva saptaita mokshadayika.”Dwarka is one of the 108 Divya Desam tirthas of Vishnu. It has the jyotirlingam of Shiva at Nageshwar Mahadev Temple in Dwarka and another jyotirlingam at nearby Somnath. Also it has a Devi Peetha, a seat of the Devi at the Bhadrakali Temple. Finally the sage Adi Shankaracharya established the Sharada Math here. In many ways Dwarka is a complete tirtha.