Other Places Of Interest

Like all ancient pilgrimage towns, Dwarka has many temples redolent with legends and religious traditions. The main Dwarkadhish Temple is a Chaar Dhaam with the temples at Badrinath, Puri and Rameswaram. It also caters to the faithful of other deities with a jyotirlingam Shiva temple, a Devi peetha shrine and a seminary founded by the Adi Shankaracharya. Also there are temples dedicated to people who were a part of Lord Krishna’s life like his mother Devaki and his queen Rukmini. Pilgrims also travel to the island of Bet Dwarka that has its own shrine to Krishna as Dwarkadhish. 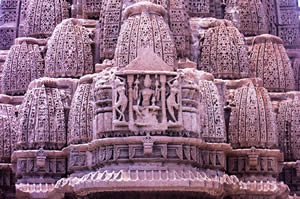 Rukmini was Krishna’s principal queen; the others were Satyabhama and Jambavati. A delicately crafted marble temple dedicated to Rukmini stands at the northern end of town. The temple was built in the 12th century and has a beautiful marble image of the queen in the sanctum. The walls and pillars are adorned by intricate carvings and there are frescoes that depict the main episodes of Krishna’s life. The temple also has paintings of the ten avatars of Lord Vishnu and carved panels of marching elephants.

This temple stands at two kilometres’ distance from the main Dwarkadhish temple and there is an interesting myth about it. It is said that the sage Durvasa invited Krishna and Rukmini to his ashram for a meal. Social etiquette decreed that the guests should not eat or drink before they were served by their host. On the way to the ashram Rukmini felt thirsty and begged Krishna for some water. He struck the ground with his foot and a spring of water began to flow. Unfortunately while Rukmini was drinking the water Durvasa appeared and he was most displeased and cursed her that she would never be worshipped at the same temple as Krishna. Krishna. 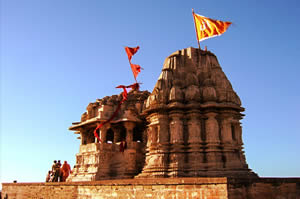 The sacred seats of the mother goddess Mahadevi, called shakti peethas, are spread across the country at fifty one locations. One of them is this temple at Dwarka. Krishna’s clan the Yadavas were mighty warriors and they worshipped the warrior aspect of the goddess called Mahakali. 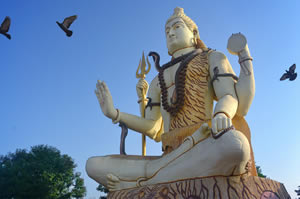 There are twelve jyotirlingams that are the most sacred of Shiva shrines in the land. Here the lingam is said to be swayambhu, or self manifest. This temple to Lord Shiva is listed among the jyotirlingam shrines. The temple is 17 km from the city and the lingam is placed in an underground sanctum. 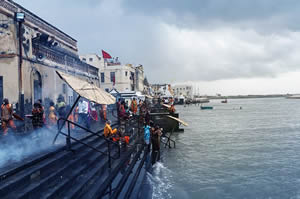 This is the main bathing ghat of the Dwarkadhish temple. It stands at the confluence of the Gomati River and the sea. Pilgrims bathe at this holy confluence and then walk up the fifty two steps of the Swarga Dwar to enter the temple. 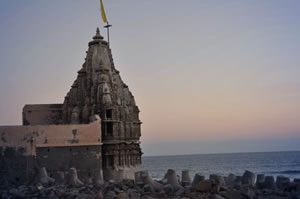 This beautiful temple stands at the confluence of the Gomati River and the sea and is dedicated to Samudra, the god of the oceans who lent land to Krishna to build his new city. Nearby is the Panchnada Tirtha, it has five sweet water wells that are considered sacred by pilgrims. There is also a small temple here dedicated to the River Gomati and an image of the river goddess stands in the sanctum. 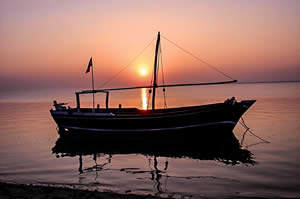 Bet means an island in Gujarati and this island tirtha is 30 km from Dwarka near the coastal town of Okha. This conch shell shaped island is also called Shankhadwar tirtha. The legends say that Samudra, the god of the oceans had given twelve yojanas of land to Krishna when he was building Dwarka. At Krishna’s death the sea swept in and reclaimed that land and only this small island remained standing. It is said that the pleasure palaces of Krishna’s queens Satyabhama and Jambavati stood in this island and the names of fifty six of his wives are still recited by the priests at the temples.

Pilgrims have to take a twenty minute boat ride to reach this Bet Dwarka. Another Dwarkadhish Temple stands on the island. The temple was built in the 19th century and here the image in the sanctum depicts Krishna as a warrior, holding a sword and shield, laden with jewels. Here he is affectionately called Ranchhodji, the king who left the battlefield, referring to his leaving Mathura to come here. There are also shrines to his queens and the walls of the natya mandap hall are painted with beautiful murals.

Bet Dwarka also has other temples and ashrams like the Sita Ram temple; Omkarnath Ashram; Hanuman Gadhi; Padma Tirtha and Ram Dwarka. The Sudama Bhetsthal is dedicated to Krishna’s childhood friend Sudama who met him here. Krishna’s elder brother Balaram also has a temple dedicated to him. Here he is worshipped as Dauji, elder brother.

In the 1980’s marine archaeologists led an exploration around Bet Dwarka. They discovered remains of ancient sea walls and a harbour under the sea. The finding of many stone anchors and pieces of sculpture proved that there was a port here as it is stated in the Mahabharata. Also these discoveries proved that the story of the sea flowing in to drown the ancient harbour was connected to actual history. 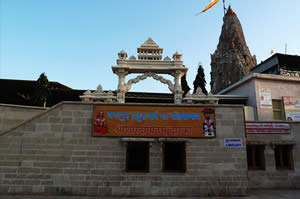 The Adi Shankaracharya led a revival of Hinduism in the 9th century and travelled across the land spreading his philosophy of Advaita. He founded four seminaries or mathas at the Chaar Dhaams. At the Sharada Math’s main temple Lord Shiva is worshipped as Chandra Moulishwara. It is said that the Adi Shankaracharya found the image of Chandra Moulishwara at the confluence of the Gomati River and the sea. The monastery also has shrines to the goddess Saraswati, Krishna and his queens, twelve hundred shalagram shilas that are the sacred stones of Vishnu and thirteen hundred shivalingams. 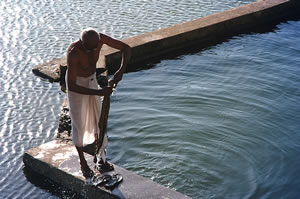 When Krishna left Vrinadavan he left behind the gopis, the milkmaids who adored him. These gopis came to visit him at Dwarka and he met them at this site 23 km from Dwarka. The temple has a tank, a tallav, and Krishna devotees use the clay from the banks of the tank, called Gopi Chandana, to draw a tilaka symbol on their foreheads. 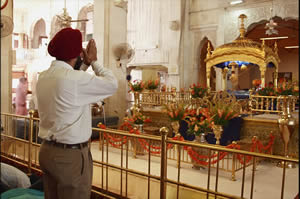 This Sikh gurudwara on Bet Dwarka commemorates the memoery of Bhai Mohkam Singh, who was born in 1663. He became one of the Panj Pyaras or five beloved disciples of the tenth guru Gobind Singhji. The Panj Pyaras were the first five men who joined the Sikh army alled the Khalsa that was founded by Guru Gobind at Anandpur Sahib. In 1705 Bhai Mohkam Singhji attained martyrdom at the battle of Chamkaur Sahib. 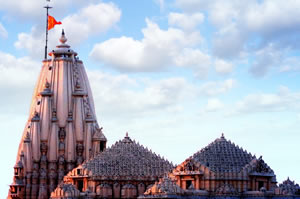 Somnath is 230 km from Dwarka and well connected by road. It is one of the most famous Shiva temples in the land. When the names of the twelve jyotirlingams are recited in ancient shlokas, Somnath is always mentioned first. So two jyotirlingams at Dwarka and Somnath, can be visited during one tirthayatra. This temple is a part of Hindu mythology and also it appears in our history.

The Puranas say that the first Somnath Temple was built by Somadeva, the moon god. He had been cursed by Prajapati Daksha and began to lose his light. He came to this place by the sea shore and prayed to Shiva. Pleased by Somadeva’s prayers Shiva blessed him and slowly the light of the moon increased and that is why it waxes and wanes even today.

In medieval times Somnath was among the richest temples of India and its legendary treasures caught the eye of the Muslim invader Mahmud of Ghazni who sacked the temple. Over the following centuries the temple was rebuilt and destroyed a number of times. The present temple was built in 1950 over the original sandstone brahmashila of the destroyed temple. Built in red sandstone and standing by the sea it is in the Chalukyan style and was named Kailash Mahameru Prasad. 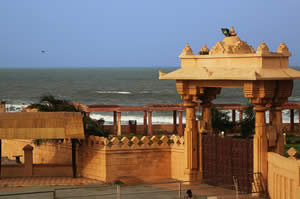 Prabhas Patan is within walking distance of the Somnath Temple. This sacred site is also called Bhalka tirtha and is the ancient Prabhas Keshtra mentioned in the Mahabharata. It is a place redolent with myths and legends. Somadeva the moon god prayed to Lord Shiva here to regain his light. Parashuram, an avatar of Vishnu came here to perform severe penances after he had killed many kshatriyas. The Pandav brothers stayed in the forest here during their years of exile.

Prabhas Patan was a part of Krishna’s kingdom of Dwarka. It is also the place where the men of the yadava clan killed each other in a drunken brawl. Then a heartbroken Krishna and his older brother Balarama ended their stay on earth and ascended to heaven. Arjuna came here to perform the last rites of his dear friend and then went to Dwarka to take away the women and children to Hastinapur. As they were leaving they saw the destruction of Dwarka as a giant wave swept in from the sea and the great city vanished forever.

There are a number of temples at Prabhas Patan including the Gita Mandir, Balaram Mandir, Vallabhacharya Temple, Mahaprabhuji ka Baithak and the Surya Mandir, an ancient sun temple.