Two thousand five hundred years ago a young prince transformed himself into a seeker of truth and after years of endeavour gained enlightenment. Then Gautama Buddha, once the prince of Kapilavastu walked from Bodh Gaya to Varanasi looking for five of his companions. He found them in a deer park in the outskirts of the city called Rishipattana where ascetics spent their time in meditation.

Gautama Buddha gave his first sermon here, an occasion traditionally called dharmachakra pravartana, turning of the wheel of law. In his sermon he revealed his path of enlightenment, the Four Noble Truths and the Eightfold Path to end suffering and gain nirvana. The five companions would be the first to join the Buddhist monastic order called the Sangha. Today the monks in their saffron and maroon robes still wander around the lawns of Sarnath and sit peacefully meditating in quiet corners by the stupas.

The emerald lawns, ruins of stupas, a vihara and many images of the Buddha mark the spot where the Buddha unveiled a philosophy that is today a world religion – Buddhism. Welcome to Sarnath, where the deer still roam and after the noise and crowds of Varanasi the air is calm, serene and welcoming.

Sarnath is a short10 km from Varanasi and can be a day trip for pilgrims. Taxis and auto rickshaws are easily available.

The Buddha in Sarnath 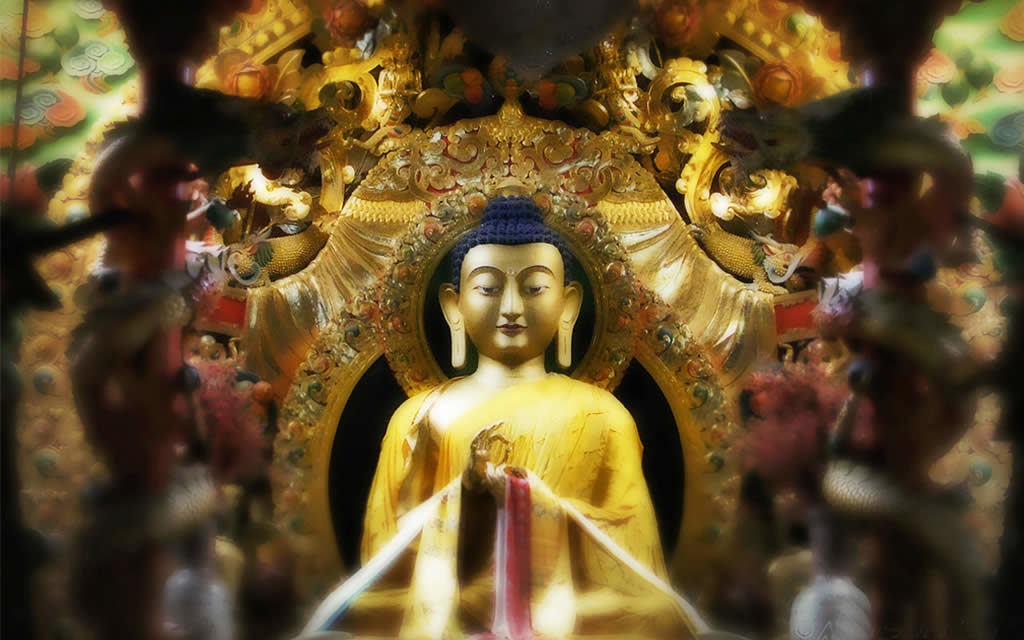 The Four Noble Truths and the Eight Fold Path are the foundations of Dhamma. It is also called the Middle Way as the Buddha always spoke of a path of moderation and refused all extreme actions. He said that religions that encouraged animal sacrifices, expensive rituals and even self-mortification could not truly give a person peace of mind. He spoke of a logical and reasonable way of life that could be achieved by everyone without the need for the priesthood.

The Eight Fold Path is a way of life that brings peace, enlightenment and finally nirvana, the freedom from the cycle of birth and death. The Path is – Right Views, Right Intentions, Right Speech, Right Action, Right Livelihood, Right Effort, Right Mindfulness and Right Concentration.

“The end of suffering is Enlightenment.
What is the truth of the End of Suffering?
It is the elimination of craving; freedom and detachment from it.” 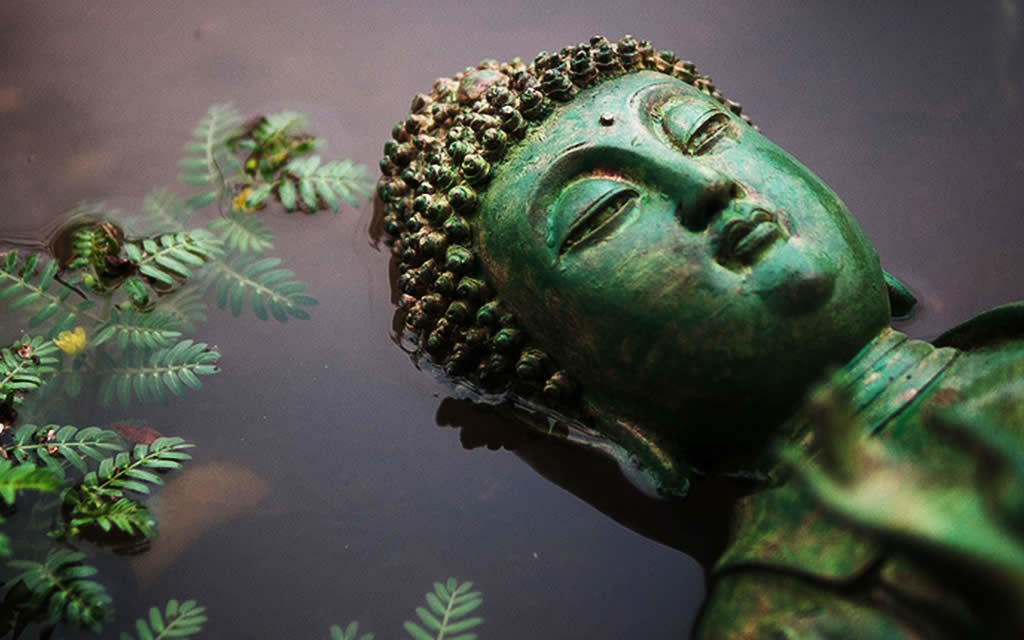 When Emperor Ashoka became a follower of Dhamma he patronised Sarnath, building stupas, viharas and chaityas here. The lion capital that is the symbol of the Indian republic was discovered here in 1904 by the British archaeologist Alexander Cunningham. In ancient India Sarnath was a centre of Buddhist learning and had many busy viharas. Both the Chinese travellers Fa Hian and Hsuan Tsang visited Sarnath and describe a place where scholars arrived from across the land.

In medieval times, like Varanasi, Sarnath faced the onslaught of Muslim invaders. The monasteries were destroyed, the monks were killed or they fled and Sarnath never rose again. Its ruins lay forgotten as Buddhism disappeared from India. Sarnath would be discovered in the twentieth century by British archaeologist and gradually through the patronage of Buddhists from across the world, Sarnath has revived again.

A stupa is a solid, curved structure that holds the relics of the Buddha or the remains of other Buddhist teachers. Devotees go around it while chanting prayers. A vihara is a monastery and a chaitya is a prayer hall and temple. 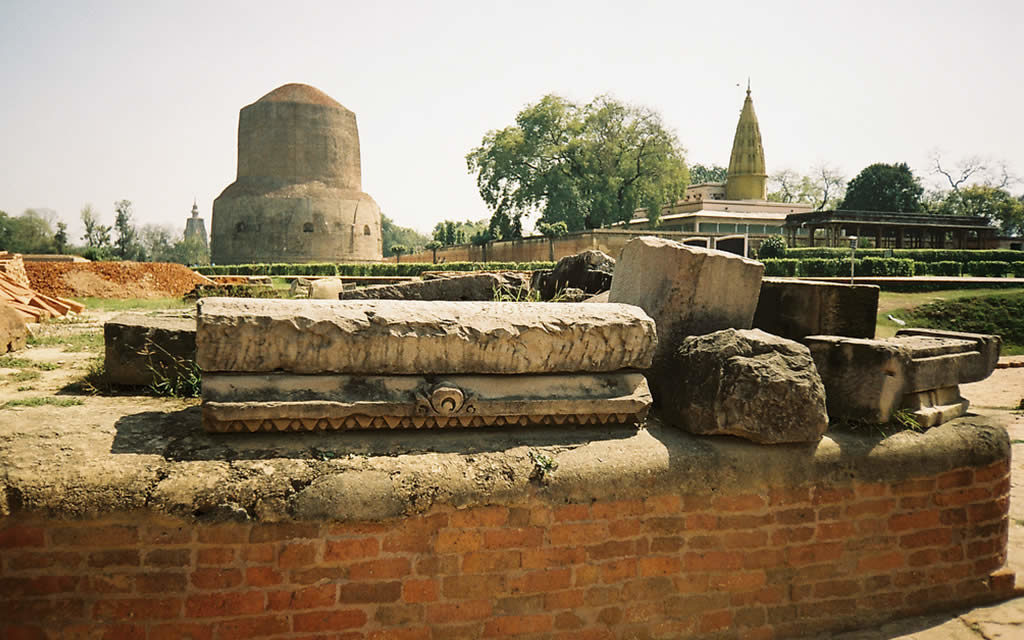 The first structure that catches the eye as one enters Sarnath is the looming pile of bricks and stones called the Dhamekh Stupa. Probably built around 500 CE it has a base of stone with carvings topped by a cylindrical structure of brick. The carvings are of borders of geometrical and floral patterns and Buddha images are placed in niches. The style is typical of the architecture of the Gupta period.

The Dharmarajika Stupa is said to mark the spot where the Buddha gave his first sermon. Built by Emperor Ashoka in the 3rd century BCE it was broken down in the 19th century by a minister of the Raja of Benares and only the ruined basement remains. The fragments of an Ashokan pillar and the lion capital were found nearby.

The Mulagandhakuti Vihara has been built at the site where the Buddha used to meditate during the monsoon retreats when he often stayed at Sarnath. The Buddha lived in a thatched hut, washed hisclothes in a pool and went begging for his food. The present building was built in 1922 by the Sri Lankan monk Anagariha Dharmapala and it has a shrine to the relics of the Buddha that were discovered in Taxila.

The red sandstone vihara has a spire like the temple at Bodh Gaya and a golden image of the Buddha stands at the altar. Here monks sit chanting and the air echoes to the sound of bells. The walls of the main prayer hall has beautiful frescoes depicting episodes from the life the Buddha painted by the Japanese artist Kosetsu Nosu in the Ajanta style. A spreading Bodhi tree stands outside and monks sit around it in calm meditation as Buddhism once again returns to its home in India. 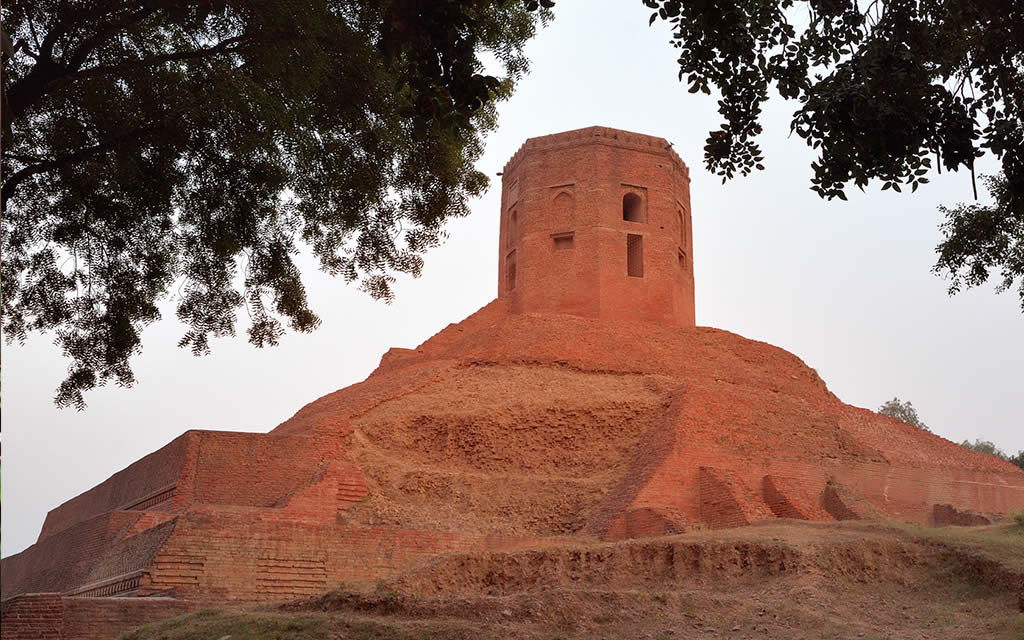 Entering Sarnath there is a grassy mound covering a Gupta period stupa topped by a Mughal pavilion. The stupa marks the spot where the Buddha first met his five disciples. Later in the 16th century a Mughal governor of the city added the pavilion to celebrate a visit by Emperor Akbar 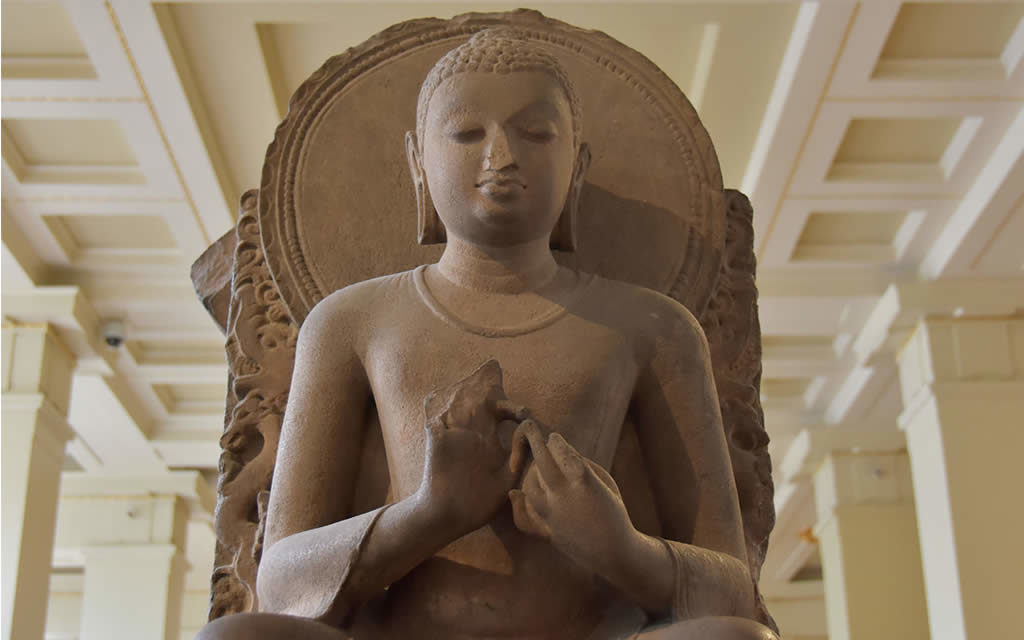 Archaeologists have discovered a number of sculptures, pillars and remains of viharas and stupas in Sarnath. These are displayed at the Sarnath Museum that is worth a visit. Right at the entrance stand the famous lion capital with four roaring lions spreading the words of Dhamma to the four directions. Inside there are some exquisite carvings from the Gupta period done in reddish sandstone. There are also examples of the Mathura school of art from the Kushan period including a smiling Buddha in a teaching posture that is one of the finest depictions of the Great Teacher.